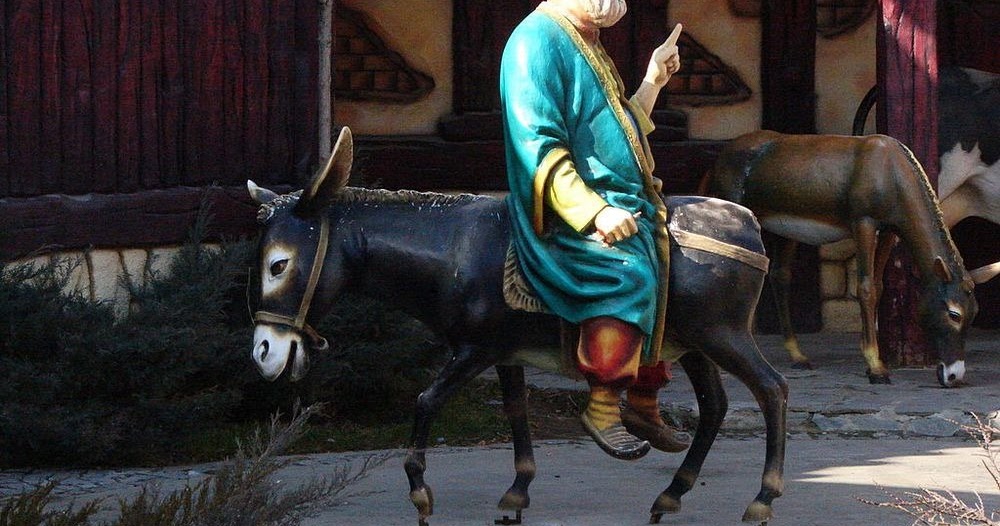 Once upon a time, there were three friends; they were poor, very poor, unnoticed and worthless. What they owned in their life was three donkeys and their job was to transport people, goods and luggage from one place to another. This was how they earned their living.
One night, after a long day of hard work under the sun of the Arabian summer. They threw their bodies over the smooth sand of the desert. The full moon and the shiny stars lit the dark doom; it was no longer dark and a beautiful sparkly night was all they can see.
One of the three men closed his eyes and said: ‘Imagine my friends that I become the ruler of this country; the sovereign majesty, make a wish?
His friends laughed and laughed.

The first friend looked at the dreamer and said: ‘you be the ruler, the sovereign. No way.’

The dreamer said: ‘Just imagine, man, you wouldn’t lose anything.’

The friend said: ‘ Ok, Mr dreamer, I want a house with a magnificent garden.’

The dreamer looked at the other friend and said: what about you?

The other said: ‘This cannot be. This would never be. A donkey cart plodder would never have dreams. We’ve no future, friend.’

The dreamer did not give up: ‘It’s me who imagine not you; this is my thought, my idea. Imagine!’

His friend got-up, collected his stuff, rode his donkey and said: ‘Let your guards carry me backwards on a donkey and let them announce to everybody that I’m a fool who didn’t believe that dreams can be true.

‘As you wish, my friend,’ said the dreamer.
In the morning the dreamer deserted his friends. He sold his donkey and looked for a different way to earn his living; a watchman, a constable, an officer, a member of the town authority, an advisor, a consultant,… finally, he married the deceased ruler’s wife and became the guardian of her eight years son. He ruled the whole country until the former ruler’s son was 16 years old.

Thirty years had passed since his friends laughed at him dreaming of ruling the country. At his prosperous days, he remembered his friends and ordered his guards to bring them.
His old friends were still donkey cart plodders but their friend, the crowned head, reminded them of their wishes.
The first was mad with happiness; he was granted a house with a magnificent garden.

The second regretted that wish ever since.

Ps, this is an old story in the Arabic history with real names and incidents but what I can remember is just the main plot; therefore, I have made some adaptations.

Dream high. Dreams can be true.

When we meet with new people, we sometimes ask them about the meaning of their names especially if their names sound new or odd. I am sure that my mother did not know the meaning of my name but she told me that she named me after a famous person that she admired at the time I was born.  My name was not that common at school or among our relatives and friends. There usually would be a maximum of two girls whose name was Nahla in any year group. Then, when I was in year 8 or 10, I had got my own Arabic dictionary from my school and the first thing all the girls checked was the meaning of their names.  It was the first time to know that my name means the first drop/sip of water one gets when drinking. I like it but I did not think that it has that special significance that others’ names have, e.g. beautiful, princess, night, morning, moon, etc. Then and after many years, when I was doing my Quran recitation exam, there was a lady registering our names. She looked very simple, old and funny all at once. She started giving every student a special prayer according to her name. And as soon as she knew my name, she said: “May Allah make you a fount of Knowledge!” I was a mother having two little boys at that time, and it was the first time to notice that my name is actually derived from the word ‘fountain’ usually of water but it can also be used in a reference to knowledge; It’s never late to learn! Before that incident, I used to like my name but after that lady’s prayer, I began loving it.

In the Arab world, we usually say that everyone has a share of his name. This means that your personality would probably reflect the meaning of your name. It’s just a saying! But why not thinking about it?

What about you? What is the meaning of your name?

Let me hear from you,